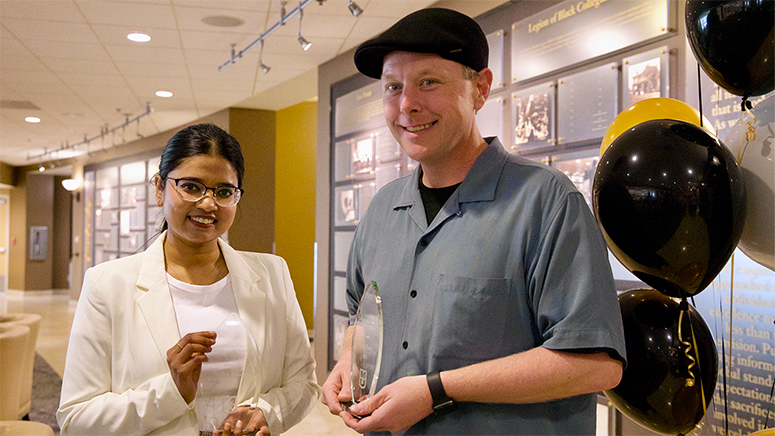 Undergraduate research is a hallmark of the University of Missouri academic experience, and hands-on opportunities in the laboratory, studio, and beyond often ignite ambitions and alter career paths. But it’s mentorship that guides, challenges, motivates, and supports students as they strive for excellence.

The MU Undergraduate Research Mentor of the Year awards annually recognize two individuals for their excellence in mentorship. This year’s winners — Christopher Josey, an assistant teaching professor in the department of communications; and Omiya Hassan, a PhD student in electrical engineering and computer science — were recently announced at the conclusion of Undergraduate Research Week.

The event, at which undergraduates present their research projects to the public, is presented by the Office of the Vice Provost for Undergraduate Studies and the Office of Undergraduate Research. For 2022, the award committee broadened the eligibility criteria beyond tenure-track faculty to include graduate students, post-doctoral fellows, and research staff.

“The student work displayed during Undergraduate Research Week is a direct result of the energy and enthusiasm mentors invest in student learning in and beyond the classroom,” said Linda Blockus, director of the Office of Undergraduate Research. “It takes hours of engagement with students to provide the technical and professional skills to complete these projects. Outstanding mentors also understand the value of personal support, coaching, and listening.” 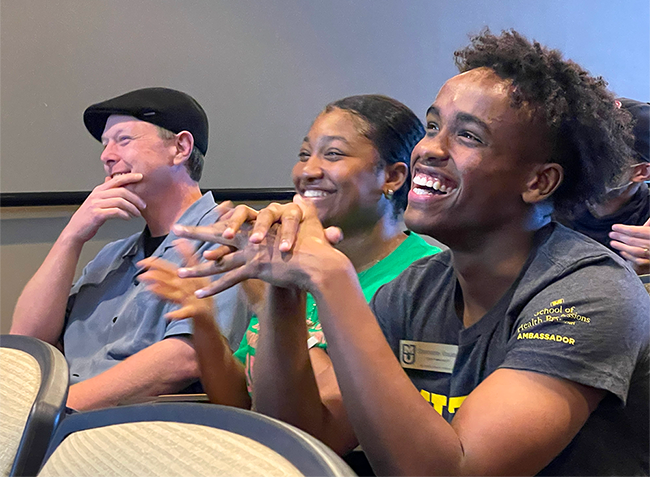 Christopher Josey is an assistant teaching professor, honors director and director of undergraduate research for the department of communication in the College of Arts and Science. His research focuses on identify and diversity within mediated communication.

His ASH Scholars project, Minority-Focused News as a Locus of Empowerment, examines how marginalized groups are represented within news media and how those portrayals impact media consumers.

Three of Josey’s ASH Scholar students nominated him for the Undergraduate Research Mentor of the Year award, describing him as having an immense impact on their understanding of research — building their competence and confidence.

“He is a tireless advocate for his undergraduate researchers,” one nomination read. “He encourages us to push ourselves and is always willing to help us branch out and find research opportunities.”

Another student described Josey as “not just my research advisor, but also a close colleague and one of my strongest advocates.”

Josey was also recently selected as professor of the year by Mizzou Athletics.

Omiya Hassan is a PhD student in electrical engineering and computer science. She is a graduate instructor and works as a research assistant in the Analog/Mixed Signal VLSI Devices Laboratory, where she focuses on the design and development of low-power integrated circuits. She recently led the research team to the finals of an international circuit design contest, something one undergraduate says would not have been possible without Hassan’s mentorship.

“I never leave a conversation with her without feeling like I have learned something new,” Hassan’s nominator wrote. “She asks thought-provoking questions to guide me to a solution and helps me learn along the way. I remember one Saturday when I could not figure out what was wrong with the circuit I had designed. I was ready to throw up my hands and give up. Omiya came to campus to help me work through the issue … Rather than giving me the easiest route, she challenged me to grow.”

During her doctorate studies, Hassan has won numerous awards, including the 1907 Women in Engineering Award in 2019 and a first-place award at the 2020 Annual Research and Creative Activities Forum. Outside of engineering, Hassan is a professionally trained vocalist in traditional South Asian music and has been freelancing digital illustrations for more than five years. After she completes her PhD, Hassan plans to pursue a career in academia.