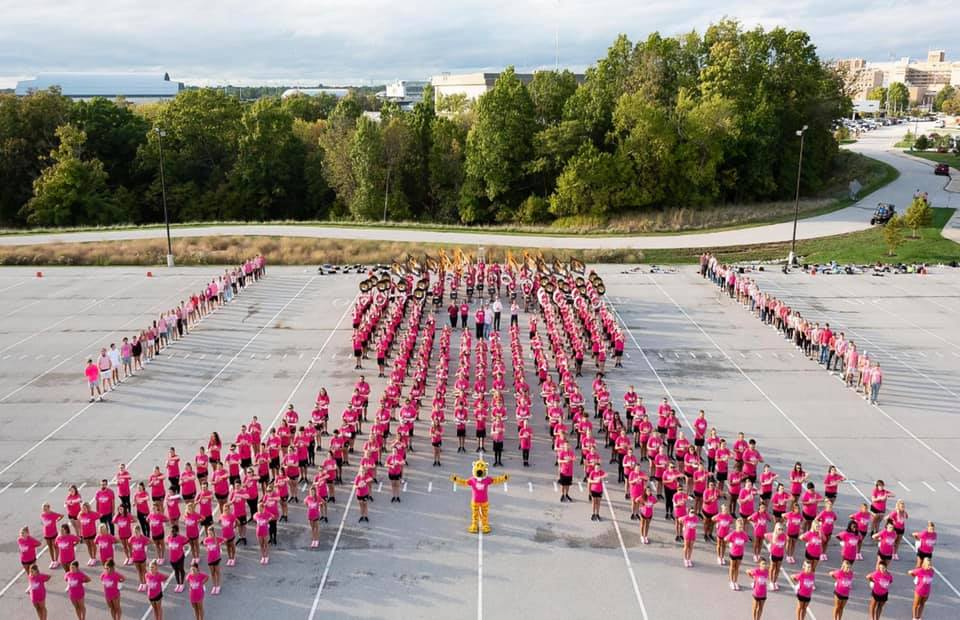 In honor of Carver's breast cancer, Horner takes and posts an incredible photo for Breast Cancer Awareness Month each year. This is their 2021 photo feature members of Marching Mizzou.

Heather Carver and Bill Horner found each other in line at a college cafeteria and connected when Carver joked about Horner’s choice of hair product.

“Our first or second day as freshmen, in line for the cafeteria, she made fun of my hair,” said Horner, an MU political science professor.

“ ‘Made fun of’ makes me sound mean!” interjected Carver, who is chair and professor of the MU Theatre Department. “I’m not mean. I asked if you had been swimming, and you just happened to have (a little gel).”

Valentine’s Day is a time to celebrate all kinds of love, and in a college town, that could on occasion include professors in love with other professors.

These couples, also known as dual-career academic couples, are not uncommon. In a study done by Stanford’s Clayman Institute for Gender Research, it was found that more than a third of academics in the U.S. have a partner who is also in academics.

Carver and her husband have known each other since 1986, when they met at Northwestern University, and have spent the past 21 years together teaching at the University of Missouri.

Both pursued master’s degrees at Arizona State University and PhDs at the University of Texas.

During his years in grad school, Horner was diagnosed with testicular cancer, something that he has since recovered from.

The couple then pursued teaching for a year at Lake Superior University, a small school in Northern Michigan just minutes away from the Canadian border. They then decided to look elsewhere for jobs because, as Carver explained, they were not “Michiganders.”

Carver was then hired by MU, so they left. Traveling to Columbia, they made a pit stop in Chicago to have a baby. Then, with their 1-week-old infant with them, they made it to mid-Missouri.

Horner was later hired by the university in 2001 as a visiting professor. The two have remained in Columbia since.

A few years later, Carver gave birth to their second daughter. Two years after that, she was diagnosed with breast cancer. She is doing fine now.

Collaboration, since they started, has been a major part of what they do — whether working with cancer awareness groups on campus or writing a book together.

They authored “Saturday Night Live and the 1976 Presidential Election,” a book on SNL’s effect on campaign politics.