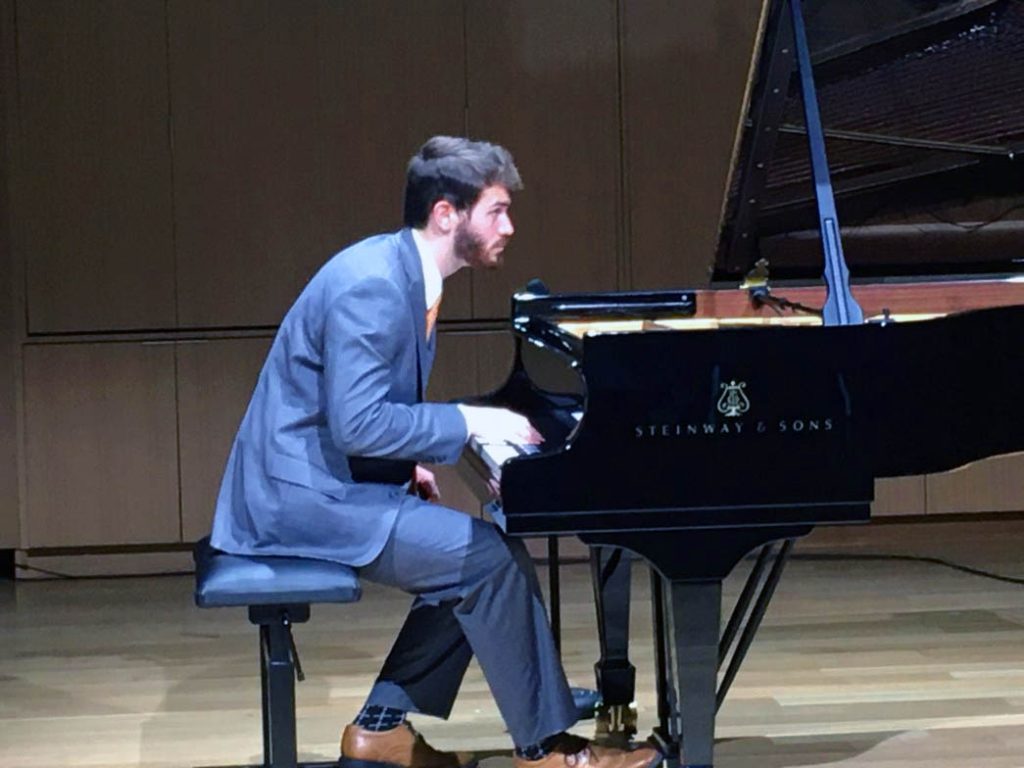 Graham Bond — a sophomore mechanical engineering major  — has just been awarded a full-tuition scholarship that guarantees him two years of civilian employment with the Department of Defense immediately after he graduates.

Right now, though, Bond doesn’t have much time to think about the future. He’s busy collecting data for a first-author paper around his research investigating 4D printing of advanced materials. And he’s preparing for a student piano recital on April 19 at Sheryl Crow Hall.

When he’s not working in Associate Professor Jian Lin’s advanced manufacturing lab, Bond is minoring in music, taking piano lessons from award-winning pianist Peter Miyamoto and oboe lessons from composer, arranger and performer Dan Willett, both of whom are professors in the School of Music.

“One of the reasons I chose Mizzou is because I can be a mechanical engineering major and do all of this undergraduate research while simultaneously taking music lessons from world-class faculty. You can’t do that at many universities,” he said. “And through the Honors College Discovery Fellows Program, I was able to start in the lab right when I got to campus. You can’t do that at a lot of universities, either.”

But back to that scholarship. Bond is one of just three Mizzou students in the University’s history — the first since 2010 — to receive the Department of Defense Science, Mathematics and Research for Transformation Scholarship.

The award provides students with full tuition for up to five years, guaranteed summer internships, a stipend and full-time employment with the Department of Defense after graduation. Bond interviewed and was selected to work with the U.S. Army Corps of Engineers in Omaha, Nebraska. Specifically, he’ll work in the fueling systems division.

“I am incredibly thankful for the generous support of the Department of Defense and the United States Army Corps of Engineer – Omaha District,” he said. “With the SMART Scholarship, I will be able to dramatically improve my academic and professional development and tangibly impact the crucial strategic research performed by the DOD.”

He said he’s also thankful to the MU Fellowships Office and Interim Director Rachel Newman for making him aware of the opportunity.

While Bond doesn’t have to worry about post-graduation plans for a while, he’s keeping his options open.

“I want to get my feet wet and see what fits,” he said. “That’s why this program is so great. I’ll get exposed not only to the fueling system division but also the mechanical engineering division and everything across the U.S. Army Corps of Engineers — and they do a lot. Afterwards, I could keep working there, earn a master’s degree or find something in the private sector.”

Two things are certain, however — engineering and music.

“What ended up selling me on engineering were my AP physics classes in high school,” he said. “I found physics most interesting, and engineering is the way you can not only learn theoretical aspects but also actually apply it and make a difference in the world around you. And I really enjoy playing music. I’ll keep playing piano throughout my entire life.”