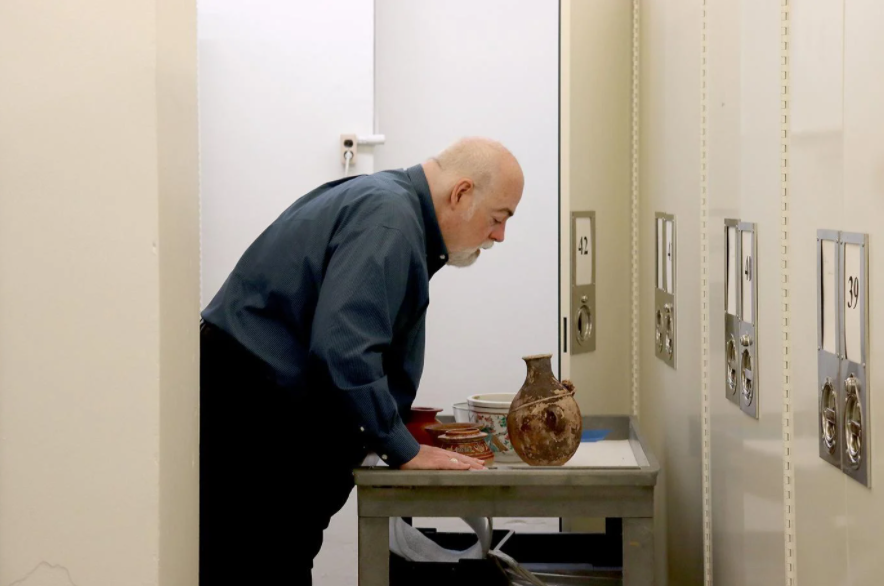 The original article was published in the Columbia Missourian on Wednesday, January 19, 2022.

After spending more than eight years away from campus, the MU Museum of Art and Archeology is on the move from Mizzou North to Ellis Library.

A set of new galleries is under construction at the library as part of the university’s strategic space reduction plan. Placing the galleries in Ellis will mean a return to the central campus, making the museum more accessible to students, faculty and staff.

“My Intro to Art History students will definitely go there,” said Anne Stanton, MU professor and associate director of the School of Visual Studies. “I’m looking forward to accessing these collections again on campus.”

The museum in Mizzou North closed to the public July 12 and is expected to reopen in the lower east level of Ellis Library by late summer or fall, according to Bruce Cox, the interim museum director.

The collection of more than 16,000 artifacts is now being stored in the future gallery space, and museum staff members are in the process of unpacking boxes, storing the pieces in cabinets and cataloguing them on an inventory sheet.

The pieces are tracked from beginning to end, Cox said, and MU will begin to renovate the space after everything is unpacked and inventoried.

Construction crews will need to reconfigure the existing rooms into six galleries, install appropriate lighting and build custom cases for the collection.

The new floor plan has one gallery that will display ancient art and two others holding many of the collection’s paintings. A fourth gallery will feature a rotating schedule of exhibits, and the final two galleries will be used by the Museum of Anthropology.

A future museum store in Ellis will include gift items representing fine art and possibly replicas of artifacts, Cox said.

The new setup includes additional resources that will let scholars interact with artifacts and art objects more directly and conveniently.

A separate study room, for example, will be used to display art but is largely a room where art history students can examine the works, Cox said.

A key advantage of the location is its proximity to the library itself. Ellis has a large collection of rare books and archaeological research that was donated to the university in the 1950s. These two collections will be more convenient for researchers to investigate, he said.

The collection was physically packed by the museum staff last fall in preparation for the labor-intensive, complicated move from Mizzou North. Campus Facilities moved some of the pieces, and the moving company KC Art was hired to transport the larger items, Cox said. The exit from the former location was completed in mid November.

There are a number of considerations when moving ancient and fragile objects, Cox said, and it was important to get it right.

A major concern is stabilizing the humidity to avoid significant fluctuations, he said.

“We try to keep the climate at a certain temperature, in the low 70s,” Cox said. “The campus has been really good about working on the HVAC system and making sure we had good control over the humidity and the temperature.”

This will be the third major move for the Museum of Art and Archeology in the last six decades or so. Over the years, the collection has been housed in Jesse Hall, Pickard Hall and Mizzou North.

It was founded in 1957 as the Study Collections for Art History and Archaeology and became the Museum of Art and Archaeology four years later when 14 Old Master paintings from the Samuel H. Kress Foundation were given to the university, largely Italian and Dutch works from the 15th and 16th centuries.

In 1976, the collections became generally accessible when the museum moved to Pickard Hall, named in honor of Professor John Pickard.

Pickard came to MU in 1892 as a professor of Greek and became chair of the Department of Classical Archaeology and History of Art, according to MU archives.

Three years later he purchased 50 plaster casts to start the collection, later adding other materials that became part of the museum.

In 2013, concerns of radiation contamination in Pickard Hall prompted the relocation to Mizzou North, a building that was once the Ellis Fischel Cancer Center.

It was announced in 2019 that Pickard Hall would be demolished as the university was unable to find a way to eliminate radioactive contamination from chemists who worked in the building in the early 20th century.

Mizzou North recently joined eight other MU buildings that are set to be demolished in the coming months, the Missourian has reported. MU spokesperson Christian Basi said the university will keep the 40-acre property after demolition.

Meanwhile, renovating a portion of Ellis Library to house the museum collection is a move faculty seems to appreciate.

Ted Tarkow, MU professor emeritus of classical studies, anticipates that his department will take advantage of the opportunity.

“We’ll take a good number of our classes every term to the museum,” Tarkow said. “We teach mythology to close to 1,000 students every semester.”