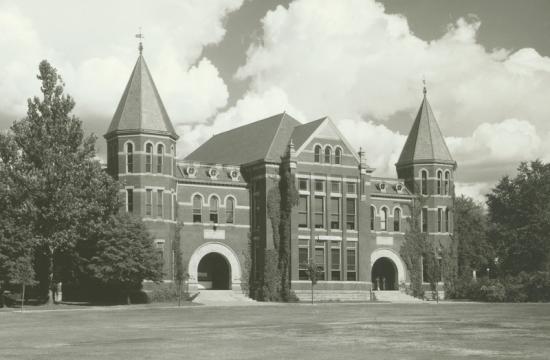 This year, The Department of Geological Sciences is celebrating its 150th anniversary, and a lot has changed since its birth as a course offering in the early 1840s and its official department stance in 1871.

Today, the department’s purpose is to “provide BS, MS and PhD degrees to students in support of their intentions to join environmental, mining, and hydrocarbon industries; pursue governmental and academic positions; and to conduct and publish research in various fields in the geological sciences,” said Bob Bauer, who got his Bachelor of Science and master’s degrees in geology at MU, was a professor in the department for 33 years, and served as director of MU’s Branson Geology Field Laboratory for 18 years.

Bauer said over the years there has been more emphasis on environmentally oriented issues, as well as research grants to support graduate students.

According to Department Chair Mian Liu, who has been with geological sciences about 30 years, the department has about 30 graduate students pursuing their master’s or PhD degrees each year, and about 50 undergraduate students are currently enrolled in the geology major.

“It’s essential for the new generation of educated citizens, not just the Earth scientists, to understand this new environment on this planet. There’s an increasing amount of stress from both nature and humans. For example, resources – fossil fuel is limited.”

Liu said traditionally, the largest number of graduates were employed in high-paying positions in the petroleum and gas industries.” Due to shifting priorities in the energy industry and the impact of climate change to consider, this is changing.

“Not only are these resources limited, but there is also the problem of releasing carbon dioxide that has contributed to global warming. Geologists everywhere realize we have to understand and manage our Earth, our planet.”

He, like Bauer, said geologists today are shifting toward environmental sciences. “It’s just a reflection of the societal need for better understanding and better managing of our planet Earth.”

Data science is another area for geologists to pursue. “In the past few decades what we’ve seen is the explosion of the amount of data, multidisciplinary data,” said Liu. “I think (this field) is very trendy now because more and more people realize that we need to be able to better understand the data and learn new science from the data. This is creeping into the field of Earth Sciences – it’s one of the field of tomorrow’s geological sciences.

“We have room to grow, and we need to grow, to grow into the new field. So, our students will be better prepared for tomorrow.”

Like so many aspects of the geological sciences, we must look to the past to predict the future. The same can be said in understanding the history of the Department of Geological Sciences here at Mizzou and how it has changed since its early inception.

Author Debbie Cutler spent months doing research on this lengthy historical article, which is broken down into easy bites for readers’ ease. Of particular help was University Archives, University of Missouri-Columbia. She received a multitude of documents from them, everything from old course catalogs to a story written in the 1940s by Luella Hoffman about her mother who went to school at the university in the 1870s. Cutler also spent time looking at online course catalogues, website articles, old newspaper archives —and many other forms of documents, including The Maneater (a publication of MU, composed of students); historical timelines; and interviews with current and former chairs, faculty, and advisors. Other major sources include “A Century of Geology at the University of Missouri,” provided by the Department of Geological Sciences and “The University of The State of Missouri” report, put out by the Curator of the Governor (ending in June 1871).

Join us for a digital walk through our department's history. https://geology.missouri.edu/node/98