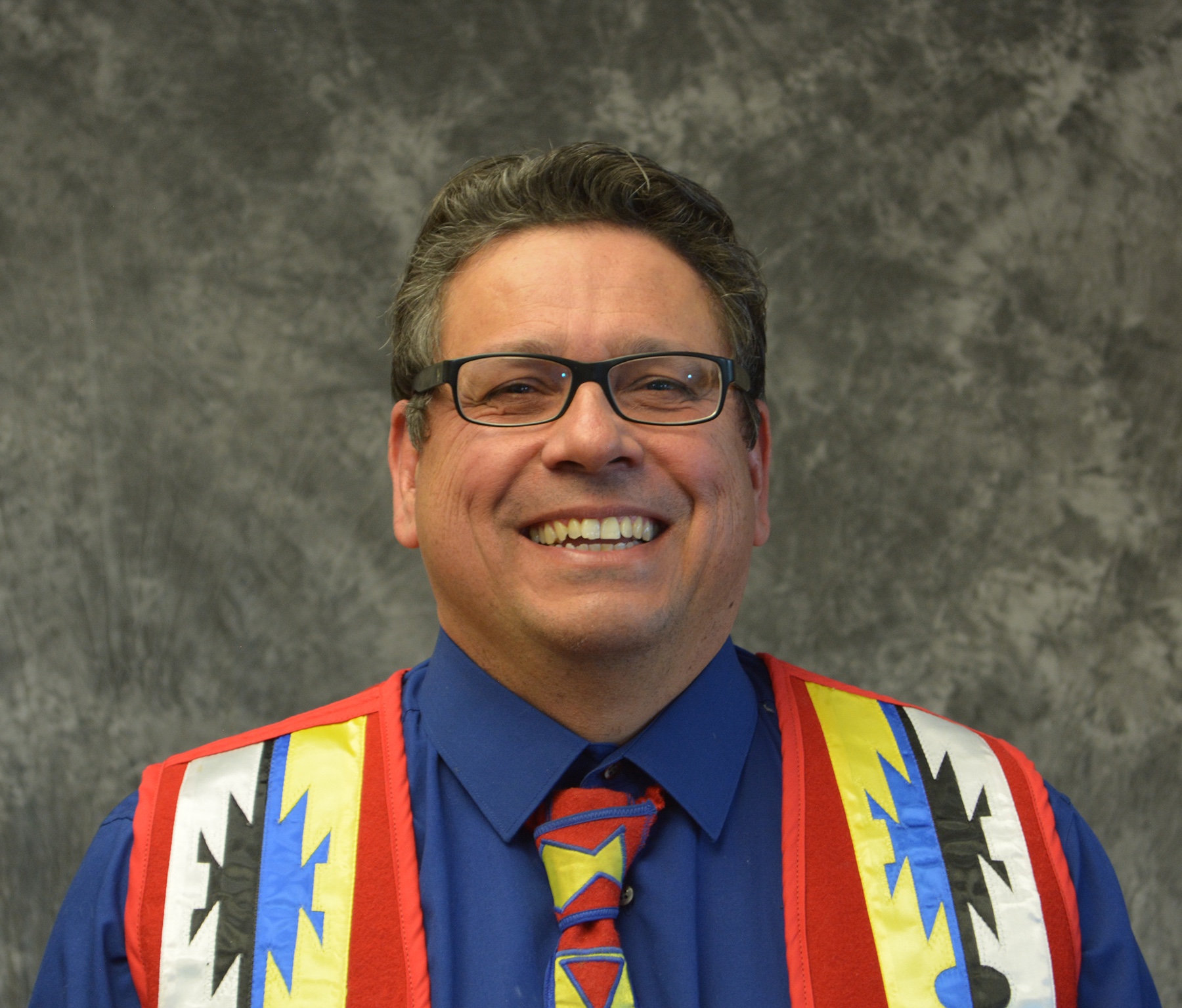 Palmer's present works stems from his past as part of the Kiowa culture, which has a rich but tortured history.

The Kiowa origin story places the Kiowas at the basin of the Yellowstone River in northwest Wyoming and western Montana. This nomadic tribe migrated to the Black Hills of Wyoming and South Dakota in search of horses, eventually finding feral horses and bison in Colorado, New Mexico, Kansas, and Texas.

But they were forced from their lands in Kansas in 1862, into a 2.8-million-acre reservation in southeast Oklahoma.

The Kiowa historically believed their dreams and visions held supernatural powers and turned to them especially during times of war, when hunting, and for healing purposes. They lived in teepees and spoke the now endangered native Kiowa-Tanoan language that is still spoken today by approximately 1,000 of their peoples, mainly elders.

Kiowa are noted for their pictographic histories of events. They created elaborate drawings first on dressed skins and eventually on ledger paper. They’re also known for their storytelling – which holds knowledge and information useful to Kiowas, such as creation (origin), historical and family stories.

“I’m a part of an indigenous culture, part of the Kiowa tribe,” says Palmer. “Growing up {in Oklahoma on the Kiowa reservation} for nearly a decade – I found our narratives, our histories, our experiences have always been diminished. They’ve always been pushed to the side, even though we have a goldmine of information and experiences and histories that are available.”

Palmer adds that growing up in Oklahoma as part of a large Native American population, had a big influence on the direction of his life and as his role as a researcher. 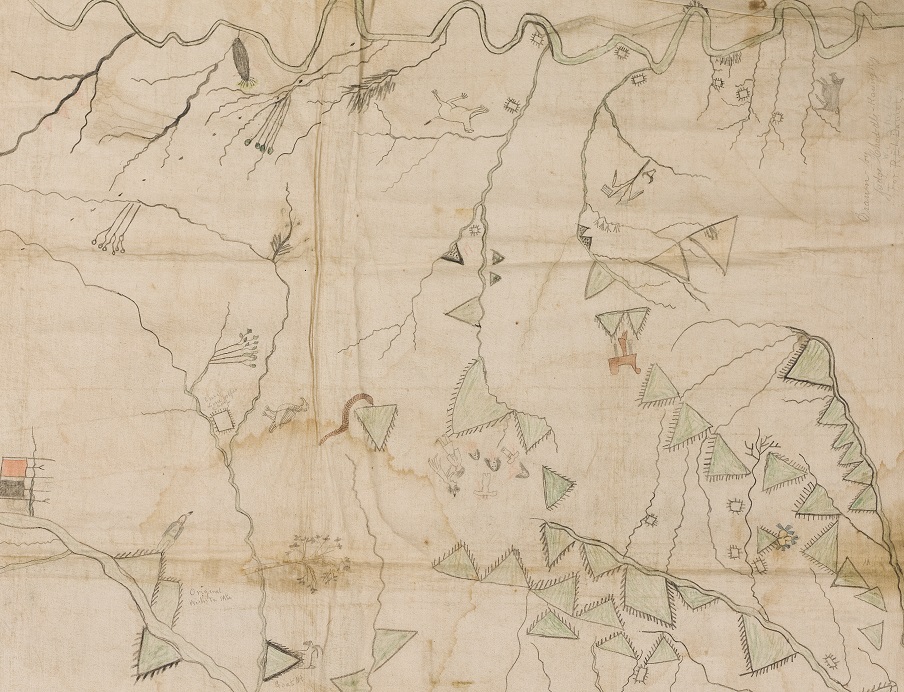 Historical Kiowa pictorial map created sometime between 1893 and 1895 showing southwestern Oklahoma and parts of the Texas Panhandle. The map presents common geologic features, like mountains and bodies of water. Also, symbols of Kiowa experience throughout the landscape.

Today, Palmer, a professor and a scholar, has three main projects he’s working on regarding indigenous cultures.

Currently Korson is in her third year of work, which was started in 2019 by Palmer. Palmer says the work theorizes possibilities that bureaucratic state maps, found within some UNESCO World Heritage nomination dossiers and resource management plans, contain indigenous cartograph elements that indigenous communities could use as the basis for creating indigenous story maps. Palmer’s work on it will carry on through the next four or five years.

A second project involves interpreting a Kiowa map created in 1895 into a manuscript with undergrad students Sarah Frost (senior, geography) and Grace Martinez (senior, biology). They are studying a digital reproduction because the rare and valuable original is housed in the Smithsonian Museum in Washington D.C. The Kiowa pictorial system is embedded in information from 1895, but it’s interpreted through the eyes of 21st century scholars from different cultural backgrounds.

Palmer’s third project, which is collaborative with about a dozen individuals (who are on the Advisory Board of the Earth TimeKeepers, a network of traditional knowledge-holders from Indigenous Nations and communities in Canada, the U.S., Mexico, and Columbia) looks primarily at the influence of art on science, and the influence of science on art through the creation of virtual realities experienced in domes or planetariums. Palmer says he has also established partnerships with faculty from the University of New Mexico and the University of Toronto.

He is working with Otomi timekeepers and knowledge holders in central Mexico, using consultants from the area, which he refers to as “ministers of culture.” This project, which involves translating indigenous knowledge into standardized 3-D images and visualization technologies, will be completed in two or three years, using a small carbon footprint.

(Note: The TimeKeepers adhere to community protocols regarding the sharing and dissemination of knowledge within their communities and with Otomi partners in Mexico, the latter of which is sharing what they know about the Otomi calendar and star knowledge.)

“It’s a virtual reality type of environment,” says Palmer. “Something that is more tangible. The VR prototype is a dome project, like a planetarium, with a virtual type of simulation played within the dome. At the present time we have animators, filmmakers, people who are familiar with dome technologies and projections … working on the prototype. And there are a lot of different actors contributing to the projects. Many different people and organizations are working together to get this prototype finished by hopefully the end of the year.”

The origin story uses calendar images, similar to those found on a Mayan calendar, using different symbols and representations.

Palmer adds the goal of the filmmakers and the animators is twofold. 1) understand the meaning of those images. And 2) take a bit of creative liberty with those images because the ideas associated with the images from the 12th and 13th centuries have changed today.

One of the problems they are working on, is using a large dome to present the finished work – which is costly and technically challenging. One solution is to use a dome at the Institute of American Indian Arts (IAIA) in Santa Fe, New Mexico, as a test site. A second option is to create a 3-D video uploaded to YouTube that can be viewed from anywhere.

“In order to create these elaborate visualization representations using VR technologies and expertise takes millions of dollars,” Palmer says. “Everyone in production wants a cut. So how do you do it?  Well, what you have to do is be very innovative. We are trying to figure out how to create the [dome] images using the fewest possible resources and maintaining the smallest carbon footprint achievable. By spending millions of dollars, what you’re doing is actually growing a huge carbon footprint. Sustainability – culturally, and environmentally – is the goal.

“So, a lot of our problems initially had to do with ramping up the participants in central Mexico on the use of technologies like iPads, which are used to record Otomi community members insights on time-keeping knowledge; used for zoom roundtable discussions; and also to view VR prototype ideas.

“Technological ramping up is something that’s a big part of the project. So, anyone who is working with or plans to work with indigenous groups in Mexico, or nearly any other place in the world, has to come to the realization that there is a digital divide, there is a resource divide, there is social and cultural disconnectedness that has to be bridged in order for these projects to get off the ground.”

The prototype project, when completed, will first be shown to the Otomi peoples, which live outside Mexico City in the highlands.

“We will have them view it, and approve it before moving on to the next stage of the project,” Palmer says. “We want to understand what is culturally appropriate and what might be inappropriate within a dome environment or with the representations presented.” 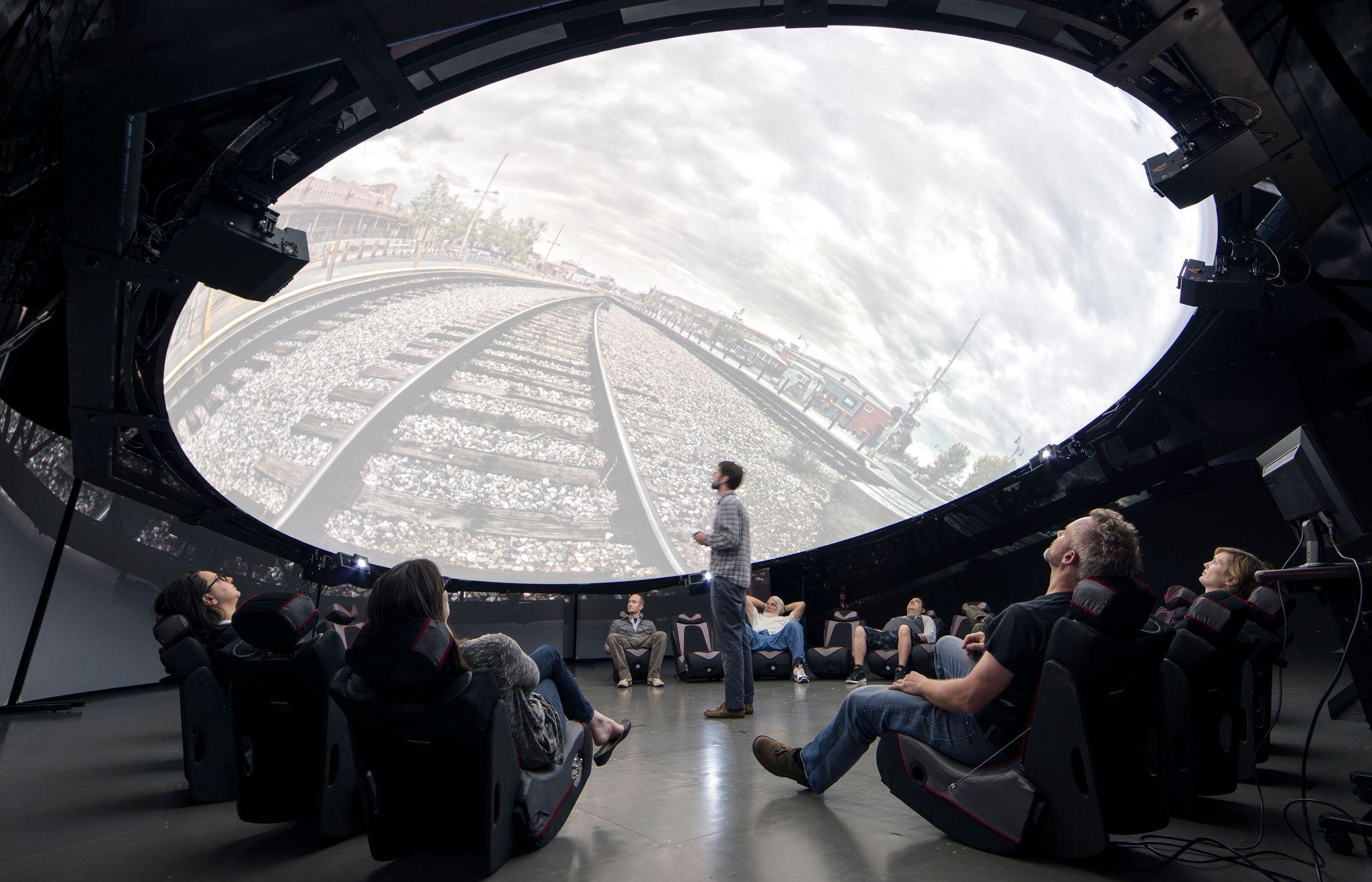 Palmer's team is thinking of using a large dome to present the finished work of his visualization project  – which is costly and technically challenging. One solution is to use a dome at the Institute of American Indian Arts (IAIA) in Santa Fe, New Mexico, as a test site. A second option is to create a 3-D video uploaded to YouTube that can be viewed from anywhere. Pictured is the dome in New Mexico. Photograph by Jason S. Ordaz, Institute of American Indian Arts (IAIA)

Their hopes for the dome project are not just for adult viewers, but also for children. They hope the younger ones will grasp the information, use it in the future for revitalization purposes.

“Youngsters know how to use digital technologies,” Palmer explains. “They know about the Internet, about social networking. They are global in their thinking, right? And so how these kids understand the Otomi content and how they interpret it is really important. We are trying to tap into their technological prowess and their technical knowledge. That’s an important aspect of this prototype.”

The goal, eventually, is to create a global indigenous database where people can go in and compare and contrast different systems, different ideas in a global sense, not just for indigenous peoples. It would be written in multiple languages, including Chinese, French, English, Japanese and southeast Asian languages, as well as indigenous languages. Beyond that, the extend of the database is unknown as it is a future project, Palmer says.

“When you get to the point of communicating with each other, that’s when users will have to figure out how to create a common language? Do we create a lingua franca where we have Indigenous languages, English, French, Chinese … mixed into a global soup of a language? How do you deal with that? That’s something that will have to be addressed in the future. When you put indigenous knowledge into a of large global database, the knowledge is going to change. Global collaborations cannot be dictated by a few individuals. Global collaborations will require a collective type of decision-making amongst everybody on the planet.”